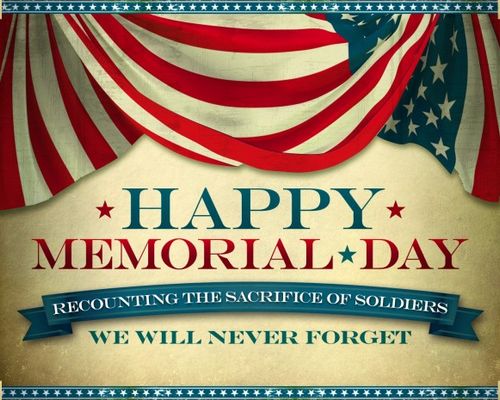 Its Memorial Day Weekend. There are actually folks out there that don't know what that means.  So . . . allow me . . . .

Memorial Day is a Federal Holiday in which we honor those who died serving in our armed forces.  It began right after the Civil War and became known as "Decoration Day" because of the act of decorating the graves of soldiers.  It became known-ish as Memorial Day around 1882 but that didn't become officially the name until after WWII.  Originally it was a holiday that was celebrated on May 30th - regardless of what day of the week it fell on.  A bill was passed in 1968 (the Uniform Monday Holiday Act) that moved four holidays, including Memorial Day to Mondays in order to create 3-day weekends.  Lots of controversy about that when it happened for fear that folks would only think of Memorial Day as the first long weekend of Summer.  Let's do our part and keep the spirit of what this holiday is all about alive.  Make sure you spread the word.   THANK YOU to those who choose to serve in the armed forces and for those who have lost loved ones while they served in the armed forces . . . thank you for YOUR service and sacrifices, too.